What's On Your Workdesk? Wednesday 495 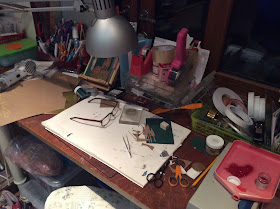 Look at me, making a Christmas card! Well, I was fiddling about with leftover kits from the card Marython (rather than just sorting them and putting the de-collated elements away) and thought I might try a few of my own designs. Well, turns out I'm sick of the sight of them, so then I started to try to alter the original idea and add some other colour and well.....I got one trial run finished (just sort of out of sight behind the lamp, on the iPad stand. I'm not keen, colours seem a bit dull to me. And there's another problem with getting back to the old desk today. I'm not here. There. Erm, huh? I've run away to Jan's for a couple of days and so this is a scheduled copy of how my desk looked at OMGO'Clock on Monday morning. Mr Dunnit reassures me that it is unchanged.  He's not a card making Rumpelstiltskin then, is he. Ah well. A few days with Jan and a lot of Christmas shopping may actually punch my mojo into gear! Have a lovely Wednesday. Catch you as soon as I'm allowed to sit down and rest!!

What's On YOur Workdesk? Wednesday 494

Well, I don't mind admitting that I didn't think I'd get as far as a blog post this Wednesday. There are some jobs aren't there, that take a billion times longer than they should, and every time you think you've nearly finished, something else hoves into view to spoil the look of the finish line. So it is with me this week. But last night I decided to file the LOs I did at a Crop last weekend. I had pencilled some journaling onto a couple of the pages because I'd forgotten my fountain pen. And now, in the cold light f a Wednesday in late November, I think I quite like the pencil and will be leaving the pages as they are. 'As the artist intended' is the phrase, I believe! 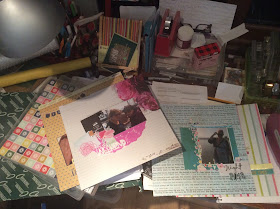 You can tell that I'm working on top of stuff..there's an open hanging file there, but a girl's gotta have some fun after hours, huh! Do show and tell, let us see that you're ahead of the game with all the seasonal upcoming stuff....I know you will be. The creeping sense of panic I've been feeling is starting to form a knot in my stomach now...seriously am going to be Mrs Deadline this year!
Julia Dunnit at 06:18 22 comments:
Share

What's On Your Workdesk? Wednesday 493 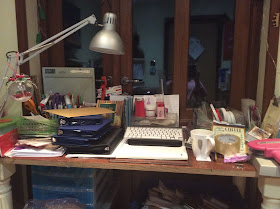 It looks a little bit business like, but it's not so bad. The files are actually Quickutz folders filed with dies. It looks as though with a couple more nights of listing, it will all be at an end, and despite the contribution to Mary's Hospice charity, I will be very glad to see the back of them.  So you can see the packaging tape, the nearly empty coffee mug and actually, some of me shows up in reflection! Oh these dark beginnings and ends! We Dunnits are off to take out an old sash window and fit a new sash window in the same hole, so there won't be any daytime visits from me - Mr Dunnit would consider it hugely unprofessional if I piggy backed on the customer's broadband to check my blog! If they are super friendly though, I might be brave enough to ask...because the alternative is to spend my non-helping times waiting, or worse, tidying the back of the van!
Julia Dunnit at 06:30 27 comments:
Share

How do you make the cut?

This week's WOYWW featured several Deskers and their die cutters, new dies, or something die cut related. I've been thinking about it since. Don't worry, I find it soothing.

I have a Big Shot, and it is within reach of my desk, as are the dies. I could almost brag that I have a die cutting station, after all, it is a specific area of surface dedicated to storing and using dies. But I don't think that real stations become covered in loose piles of other stuff, books, post and other detritus that spills over from my desk surface. No sir; people who have specific areas keep them specific. I've seen evidence - this is the WOYWW HQ remember.

You know and can just see on the shelf that I'm a Scan'N'Cut owner too. Am finally turning to that more often, particularly for multiples or large images. But I can't see me getting rid of the Big Shot, which was the route I thought I was taking when I splurged on the Scan'N'Cut.
See, I'm a 'one off' cutter. You may call it spontaneous, because that's more arty isn't it! Whilst I'm making a card or putting a LO together, it occurs to me that I need a frame, phrase or embellishment that I already have on a die. So I cut one. Often I have to cut another (and another) whist I try card colour and possible chop things about to overlap, under fill..whatever. My point is that I cut, use, put away (sometimes) and move on.

It hadn't occurred to me to have a session of die cutting to put die images into stock for later use. Turns out, others more organised than I, actually do this. So this possibly means that they use white card and colour it with inks and whatevers when they need to use it to match or stand out. Which possibly means that they have a good storage facility that keeps them flat and clean and above all accessible. Impressive. It also means, very much more impressively, that these crafty types often know what they're doing before they start. So perhaps they spend a day cutting Christmas shapes because over the next week, they plan to make Christmas cards. Wow. I can't do it. My plans are erm, too flexible for that.
And there's something in my head that says that spending a chunk of crafting time 'just' die cutting isn't a good enough use of the time. Which is preposterous and ridiculous isn't it. Look back at my WOYWW post this week....'good use of time'? Argh. This Leopard cannot change her spots, but I shall be trying some gentle over cutting...from now on, each time I use a die, I'm going to cut a spare and see if I can remember where I've put them and if I ever get around to using them. It's not a life changing method, I don't think. But if it iturns out to be just that, you'll hear about it, believe me!

What's On Your Workdesk? Wednesday 492 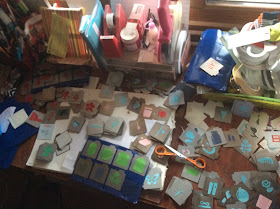 This photo is yesterday's in real daylight. After I'd taken it, I did the month end book-keeping and VAT quarter with the files and books laid on top of this lot. Because I can't bear to keep starting again! I am going to make Christmas cards this weekend with a friend, and it's all going to happen on this desk. So there's a deadline. Thank goodness!
Show and tell yourselves will you please..I have that creeping panic that most of you have been working on Christmas whilst I fiddle about pretending I have a month in hand. Please put WOYWW in your post title and link here as normal. Thank you!
Julia Dunnit at 07:08 27 comments:
Share
‹
›
Home
View web version