What's On Your Workdesk? Wednesday 297

Well, Deskers, here we are, hurtling towards the 300th edition! Several have asked if there are plans to mark it...not really. I have a thing for the anniversary which is only about three months away, and it causes enough mayhem...although I can't get enough of it! Instead of a huge 'thing' on the 300th, I'll make a little speech and then we'll all go about our Wednesday feeling cheery - how about that?  Cool. Onwards then, theres loads to see. 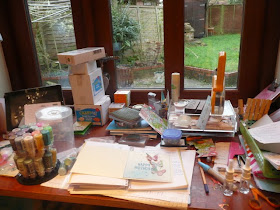 The very best thing about this photo for me is that I took it yesterday at about 4.30 in the afternoon. Still light outside!  Man, that's such welcome progress. That turning world..it actually is starting to show that it's turning.  And in less profound news...the desk shows a card I 're-worked' for an upcoming workshop. Due to popular demand *snort*. Under that is the notebook listing ingredients and method.  Of course there's the glitter glues again - never mind Christmas...isn't glitter or pearly the law when you're doing butterfly stuff? The pile of boxes are china and glass bottles awaiting some paint and pattern.  The box on top which makes the whole thing look precarious is actually filled with printer cartridges and will be put into a proper location when I have determined that the person who is using the printer is satisfied with the supply. It caused some bad words late yesterday, see. Amazing how someone so unendingly patient with his wife and her follies can be so impatient (and rude) over an inanimate object! I think that's it in terms of interest here. Look at your own desk..photograph it, upload it to your blog and link here so that I can be sure that mine is as interesting as yours. It's important to me.
Julia Dunnit at 06:07
Share

Your contribution is a valuable thing - thanks for taking the time!